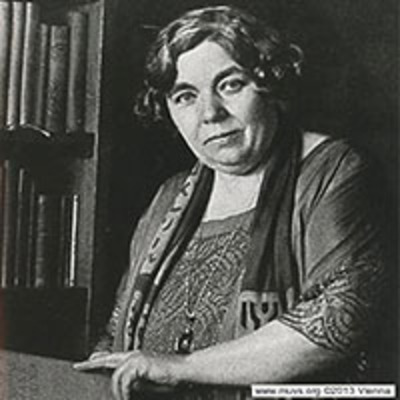 Stöcker was raised in a Calvinist household and attended a school for girls which emphasized rationality and morality. She moved to Berlin to continue her education and then she studied at the University of Bern, where she became one of the first German women to receive her doctorate. In 1905 she helped found the League for the Protection of Mothers (BfM, Bund für Mutterschutz), and she became the editor of the organization's magazine Mutterschutz (1905-1908) and then Die Neue Generation (1908-1932). In 1909, she joined Magnus Hirschfeld in successfully lobbying German parliament from including lesbian women in the law criminalizing homosexuality. Stöcker's influential new philosophy, called the New Ethic, advocated the equality of illegitimate children, legalization of abortion, and sexual education, all in the service of creating deeper relationships between men and women which would eventually achieve women's political and social equality.

During World War I and the Weimar period, Stöcker's interest shifted to activities in the peace movement. In 1921 in Bilthoven, together with Kees Boeke and Wilfred Wellock, she founded an organisation with the name Paco (the Esperanto word for peace) and later known as War Resisters' International (WRI) the "Internationale der Kriegsdienstgegner". She was also very active in the Weimar sexual reform movement. The Bund für Mutterschutz sponsored a number of sexual health clinics, which employed both lay and medical personnel, where women and men could go for contraception, marriage advice, and sometimes abortions and sterilization. From 1929 to 1932, she took one last stand for abortion rights. After a papal encyclical, the Casti connubii, issued on December 31, 1930 denounced sex without the intent to procreate, the radical sexual reform movement collaborated with the Socialist and Communist parties to launch one final campaign against paragraph 218, which prohibited abortion. Stöcker added her iconic voice to a campaign that ultimately failed.

When the Nazis came to power in Germany, Stöcker fled first to Switzerland and then to England when the Nazis invaded Austria. Stöcker was attending a PEN writers conference in Sweden when war broke out and remained there until the Nazis invaded Norway, at which point she took the Trans-Siberian Railroad to Japan and finally ended up in the United States in 1942. She moved into an apartment on Riverside Drive in NYC and died there of cancer in 1943.