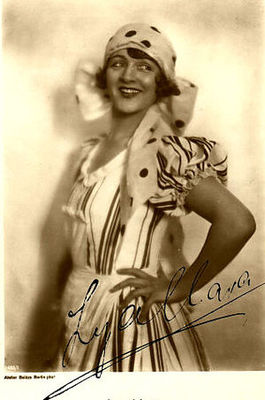 Lya Mara (August 1 1897 - c.1960) was one of Germany's biggest silent movie stars. She began her acting career as a dancer, after moving with her family in 1913 to Warsaw, just before the start of World War I.

Her first film in Germany, Halkas Gelöbnis, was directed by Aldred Halm, and produced by Frederic Zelnik, whom she later married in 1918. It was with Frederic Zelnic that she left for London after Hitler took power in Germany in 1933. There is no record of her acting after leaving for London. Her husband, Zelnick, died in London on November 29, 1950 and it is believed that Mara lived out her final years in Switzerland, although unconfirmed.