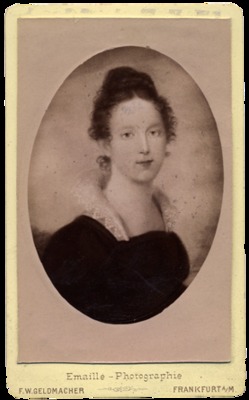 Maria Belli-Gontard was a German writer, translator, and historiographer born on April 20, 1788 in Frankfurt. She suffered from poor health during her childhood. She was educated by a private teacher and steward. Between 1796 and 1798, she spent some time at the house of her aunt, Susette Gontard, and received private lessons from Friedrich Hölderlin. She found literary success in 1845 after a trip to Constantinople.

Originally, her name was Marie, but she changed it to Maria in 1810 after marrying Johann Peter Belli, who was Catholic. This caused some distress to her parents, for Protestants and Catholics did not get along. The couple had two sons, though the elder child died in 1819 of pertussis.

Between 1842 and 1843, Belli-Gontard organized literary discussion groups. She and her husband enjoyed travelling abroad via Belli’s contacts. Such trips improved her health. After his death in 1859, however, she travelled only once more to Constantinople. She died on February 1, 1883 in Frankfurt.