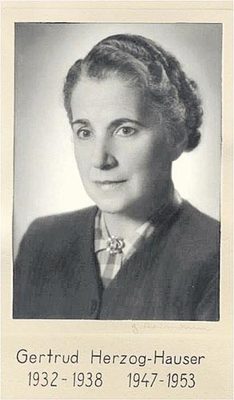 Gertrud Herzog-Hauser was an Austrian classical philologist born in Vienna on June 15, 1894. She studied classical philology, German, and philosophy in Vienna and Berlin. She received a teaching diploma in 1917. She worked as a teacher at a girls’ high school in the Rahlgasse while simultaneously continuing her professional studies and publishing articles for Realenzyklopädie der klassischen Altertumswissenschaft. In 1932 Gertrud became the first woman at the University of Classical Philology where she lectured in the Department of Classical Philology. She was appointed director in 1937.

Her career was interrupted by the annexation of Austria by the Nazi regime. Though Gertrud was Jewish, her marriage to Carry Hauser, who was not Jewish, protected her initially. However, she emigrated through the Netherlands to Switzerland. After returning to Vienna, she taught at Mädchengymnasium Wenzgasse. She received the title of “Associate Professor” at the University of Vienna. She suffered a stroke in 1950 and died three years later on October 9, 1953.