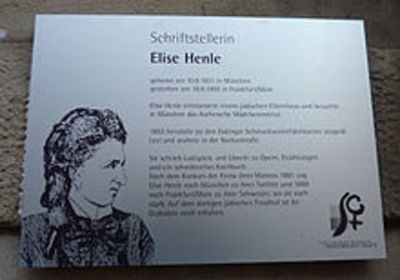 Elise Henle was a German writer born in Munich on August 10, 1831 or 1832. She was born to a wealthy Jewish family originally from Stuttgart. Elise wrote her first pieces while attending a girls’ school in Munich. These pieces ranged from comedies to dramas and opera librettos to cookbooks.

On July 3, 1853 she married Leopold Levi and moved with him to his hometown of Esslingen. They had one daughter, Matilda. Between 1876 and 1880, several of Elise’s pieces became well-known on numerous stages. When her husband filed for bankruptcy, Elise took Matilda and relocated to Munich. She lived comfortably off of income earned from her works. She died in Frankfurt am Main on August 18, 1892.