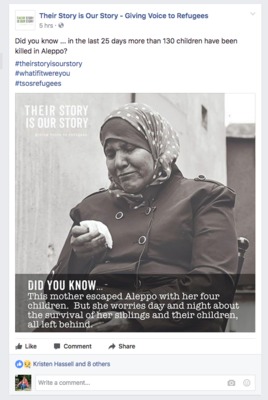 Amina is from Aleppo, where she was a math teacher. She is married with four boys. Her family fled to Turkey from Syria after losing their home in the war. Amina and her youngest son then sailed on an inflatable boat to Greece. Using cars, buses, and trains, they traveled from Greece to Macedonia, then on through Serbia, Croatia, Slovenia, and Austria before finally arriving in Germany. They stayed for two months in Camp Hamburg before being transferred for a short time to Lemberg. Lemberg was followed by another camp for three and a half months and then to Eisenberg before moving into a house.

The home they were placed in houses twenty-six people, including eleven children, all from Syria. Amina says there are few problems in Germany but does find the group housing difficult. She says it is very hard to have privacy. She hopes to be granted residency soon, so her husband and other boys can join her. She misses them terribly. November 2018 update:

Amina was reunited with her husband and older sons in Nov. 2018. TSOS was at the airport to video that reunion and did an extensive interview with her and her family several days later.