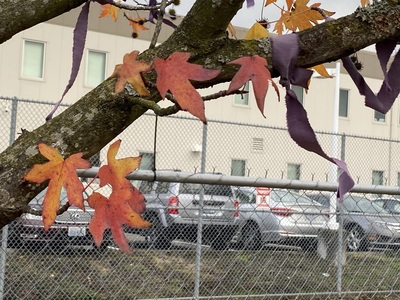 AIDNW: Purple Ribbons on the Trees

From an interview with Betty Devereaux, a volunteer serving with Advocates for Immigrants in Detention Northwest (AIDNW). The organization helps detainees when they are released from the Northwest ICE Processing Center in Seattle.

There are several refugee-advocate groups who come here and have prayer services and demonstrations. One of those groups, called “Love Resistance,” had an event here several years ago and they tied hundreds of purple ribbons on the trees outside the detention center. They want to close this thing down. They're here sometimes, demonstrating against the stuff that's going on inside, against the whole, broken immigration system.

I have yet to meet a bad “ombre.” The people detained here are just trying to get by, the way you and I are trying to get by. They have families, they have jobs, they're decent citizens. Maybe they had a tail light go out on their car but is that a reasonable excuse to have them spend six months in a detention center? I mean, would that happen to you if your tail light went out? Somebody has to take a stand, somebody has to say this is wrong. And I'm trying to help the people who are being wronged.