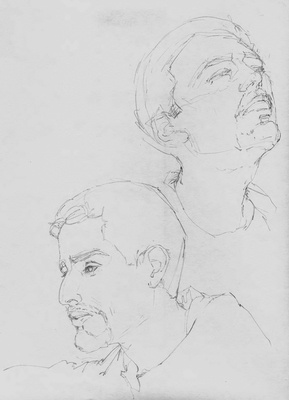 I met Aeham in the summer of 2016 in Germany. Despite having just travelled all night by bus, he was open and so friendly, with a smile that lit up his whole face. After less than a year in Europe he was speaking enough German and English to have a good conversation, and even make jokes. But when he told us about his life in Syria and his escape to the EU and his family still in Yarmouk, his eyes got so deep and sad I thought the spark would never return. And then he played his music for us. It is a sound that will stay with me forever.

Aeham comes from Yarmouk, a mostly-destroyed suburb of Damascus in Syria. When bombs started falling in 2014, Aeham pushed his piano on a vegetable cart into the destroyed streets and played music. With a friend, he would make food and hand it out to survivors. He explained,

"Music makes us happy. Full of energy and full of lovely things in the heart but it doesn't make anything for the stomach. In Yarmouk we couldn’t make enough falafels to fill stomachs because we have 100,000 people. But we can play music for 100,000 people...”

Yet music didn’t make the streets safer. Aeham was hit and his friend was killed by a sniper as they served falafel to the neighborhood. His piano was blown up in the street by militants.

"There has been a safe place [in Yarmouk] made for children underground. A small place for happiness because there has been a lot of sadness, a lot of dying there. I have a friend who makes music, makes jokes with the children.... it helps the children to not stay in the street because it's very dangerous...a sniper killed [a child] when she played piano with me [in the street]. She was twelve years old. Yes, it's good to play with the children under the ground, not outside."

When he realized he couldn’t wait out the war, Aeham made a 2,400 mile journey to Germany, hoping to find a safe place to live and send for his wife and two children. He began to perform concerts to benefit war-torn Syria.

“I have a lot of memories from music. I didn't [used to] play a lot of pain music. Now I play a lot of pain music because I have pain. I talk about Syria and play music, tell the people my story...but it is not changing anything. In this dirty war nobody can have a decision. You die or flee. You have it only one way. Nobody in Syria is safe.”

Aeham has since been reunited with his young family in Europe and continues his work for those affected by the Syrian conflict.

I wanted to somehow embed Aeham’s music into my portrait of him because it is so expressive of his story. I painted a QR code in the bottom corner of the portrait, which, when scanned with a mobile device, will take the viewer directly to a sound recording of Aeham’s music, making this a collaborative artwork in a way. I hope this is symbolic of how people can come together across oceans and cultural divides to make something meaningful and even beautiful.