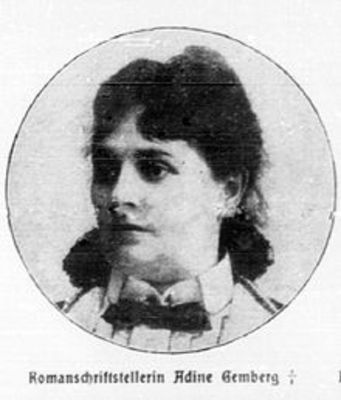 Adine von Baker (von Becker) was born on April 28, 1860 in St. Petersburg, Russia. Her father, Carl von Baker (von Becker), was born in Germany and was an English language teacher for the Russian tsar. Her mother was Princess Vera Gévachoff. After the death of her father, Adine moved to Karlsruhe, Germany, where she worked in a hospital as a minister to the sick. When she married Officer Gemberg in 1886, she began writing comical stories for the Berlin Newspaper. In 1894, before she moved to Karlsruhe, she wrote her first work called Die evangelische Diakonie. Ein Beitrag zur Lösung der Frauenfrage. She released her second work in 1896. Her most well-renowned work was a novel called Morphine, where she speaks out against the open treatment of drug addiction. Adine’s final work came in 1898, which was titled Der dritte Bruder im Schlaf – Tod – Wahnsinn and further explained her position on drug addiction treatment. She died on August 10, 1902 in Wittenberg, Germany. She had no known children.