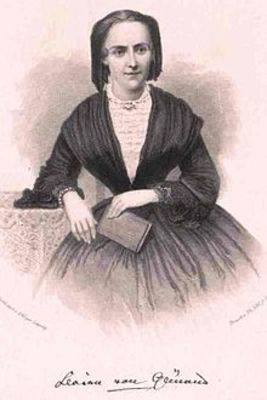 Claire von Glümer was a German writer and translator born in Blankenburg on October 18, 1825. She was the daughter of lawyer Karl Weddo and writer Charlotte von Glümer. Over the years, the family moved to Germany, Switzerland, France, and finally Germany once more after her mother died in 1841. Her father became a reporter for a Prussian newspaper in 1848. Claire joined him in his career for about half a year.

Her brother Bodo was arrested in 1849 for participating in the Dresden Uprising. He was originally sentenced to death, but was pardoned in favor of a life sentence in prison. Claire and her friends planned his release, but they were discovered and imprisoned at Schloss Hubertusburg for three months. After her release, she earned her living by literary work comprised of travelogues, short stories, tales, and translations. All the while, she continued to negotiate for her brother’s release which was finally achieved in 1859. Claire died in Blasewitz on May 20, 1906.