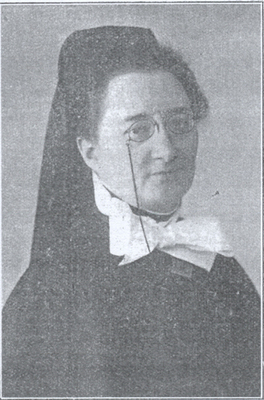 Henriette Arendt was born on November 11, 1874 in Königsberg and was the daughter of merchant and city-council chief Max Arendt, who chaired the representative assembly of the Jewish community and the Central Arms Commission in Königsberg from 1903-1913. Henriette was educated first in her hometown before going to a school in Geneva for one year, followed by a trade school in Berlin to finish her studies. She trained as a nurse at the Jewish Hospital in Berlin from 1895-1896 and continued her work in that field by nursing in different hospitals, mental hospitals, and home care. In 1902-1903 she joined the Stuttgart auxiliary nurses association. In addition to nursing, she also became a policewoman and medical examiner during the same time period. Henriette was supposed to help with the arrests of suspected prostitutes, but she spoke about and published essays about problems she witnessed regarding the law’s records management and possible embezzlement. As a result, she was always at odds with her superiors and was eventually pressured to resign.

Afterwards, she moved to Switzerland where she continued to work against international trafficking of children and as a social worker for orphans. When World War I began, she worked as an interpreter until her Swiss domicile certificate was withdrawn. She married in February 1915, but the marriage was not recognized. Between November 1915 and March 1916 she worked in a care facility for refugees from Galicia. In later years, she worked with the Red Cross. Henriette died in Mainz on August 22, 1922.