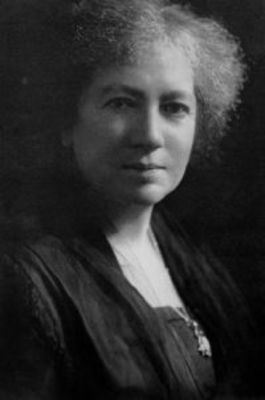 Dame Maria Matilda Gordon DBE was a Scottish geologist and paleontologist born in Monymusk on April 30, 1864. Her father was the headmaster of Robert Gordons College and her oldest brother, Francis Grant Ogilvie, was also a scientist and director of the London Science Museum.

At 9-years-old, Maria attended the Merchant Company Edinburgh Ladies’ College and eventually became head girl and best academic pupil. At 18, she studied piano for a year at the Royal Academy of Music in London before pursuing a Bachelor of Science at Heriot-Watt College. In 1890, she graduated with a specialization in geology, botany, and zoology at University College London. The following year she travelled to Berlin University to continue her studies but was refused admission because at the time women were not admitted to institutions of higher education in Germany. Instead, Maria accompanied geologist Baron Ferdinand von Richthofen and his wife to Munich. There, she studied and researched with Karl von Zittel and Richard von Hertwig.

In July of 1891 Maria travelled with the Richthofens to the Dolomites, a distinct range of mountains, where she began her focus on geology. In 1893, she became the first woman to be awarded the Doctor or Science in Geology from the University of London. In 1900, she also became the first woman to be awarded a PhD from the University of Munich, receiving a distinction in the fields of geology, paleontology, and zoology. Her research was performed in the South Tyrol, an area of the Italian Alps near the Austrian border. Through observation and measurement of the range’s structures, she drew conclusions regarding folding and structuring deformation and tectonic structure of the Alps.

Maria was also active in politics and Women’s Rights. On February 8, 1922, she was selected as prospective parliamentary candidate for the Lloyd George supporting National Liberals at the Canterbury constituency. She served as honorary president of the Associated Women’s Friendly Society and the National Women’s Citizens association. She also held the position of President of the National Council of Women of Great Britain and Ireland.