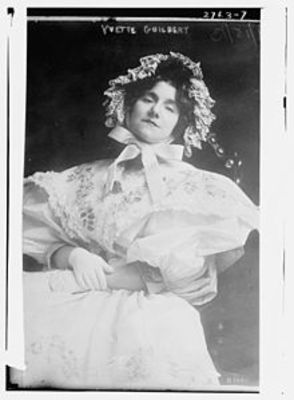 Yvette Guilbert (Emma Laure Ester Guilbert) was a French cabaret singer and actress born in Paris on January 20, 1865. She began singing during her childhood and worked as a model at 16 in the Printemps department store in Paris. She was discovered by a journalist. Yvette took voice and acting lessons, which prepared her for appearances on stage in 1886. She debuted at the Variette Theater in 1888. In the two years that followed, she sang at the Eldorado Club, the Jardin de Paris and headlined in Montmartre at the Moulin Rouge.

She preferred patter songs and appeared regularly alongside fellow star Kam-Hill. Yvette was known for her songs and for her imitations of the common people of France with which she had familiarity due to her poor background.

Yvette married Dr. M. Schiller in 1895. She toured England, Germany, and the US; she performed at Carnegie Hall in New York City. In her later years, she appeared in several silent films and talkies. She also published novels and instructional books. On July 9, 1932 she was awarded the Legion of Honor as the Ambassadress of French Song and was a respected authority on her country’s medieval folklore. Yvette died on February 3, 1944.