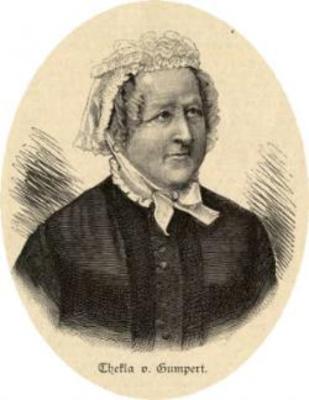 Thekla was born in Kalisch in 1810. Her father was a doctor for the military and when he was transfered, he came in contact with the Prussians. Thekla made friends with the daughter of the Prussian chief governor. She grew up in a world controlled by Prussian rule and influence.

Her father died when she was 22. She lived with some friends and helped raise their children. During this time she realized her calling as a teacher. When the parents of these children died, she took over in raising them and moved to Dresden. After six years there, she moved to her mother's home in Berlin.

Through the influence of legations counselor, and poet, Franz von Schober, whom she married when she was 46 and divorced 4 years later, she found the courage to develop her writing skills. She traveled between England and Germany many times. She died in 1897 at the age of 86 in Dresden.