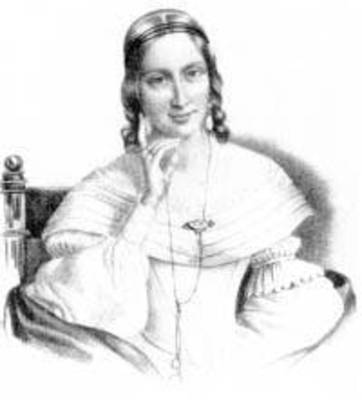 She was born at Tressow, in the duchy of Mecklenburg-Schwerin, daughter of Carl Friedrich Graf (Count) von Hahn(1782-1857), well known for his enthusiasm for his granddaughter of Friedrich Graf von Hahn, the philosopher and astronomer, and stage productions, upon which he squandered a large portion of his fortune.

She married, in 1826, her wealthy cousin Friedrich Wilhelm Adolph Graf von Hahn, which gave her the doubled name. With him she had an extremely unhappy life, and in 1829, even before the birth of her mentally retarded daughter Antonie Gräfin von Hahn (1829-1856), her husband's irregularities led to a divorce. The existence of a second child, a son, by her partner and travelling companion Adolf Baron Bystram, supposedly born in 1830 and, like her daughter, put in someone's professional care, cannot be ascertained, neither in the more than 1000 letters by her or to her nor anywhere else. The countess travelled, produced some volumes of poetry with true lyrical feeling, and in 1838 appeared as a novelist with Aus der Gesellschaft, a title which, proving equally applicable to her subsequent novels, was retained as that of a series, the book originally so entitled being renamed Ilda Schönholm.

For several years the countess continued to produce novels bearing a certain subjective resemblance to those ofGeorge Sand, but less hostile to social institutions, and dealing almost exclusively with aristocratic society. The author's patrician earnings at length drew upon her the merciless ridicule of Fanny Lewald in a parody of her style entitled Diogena. Roman von Iduna Gräfin H..-H.. (1847), and this, as well as the death of Adolf Bystram in 1849, and the revolution of 1848 seem to have co-operated in inducing her to embrace the Roman Catholic religion in 1850. She justified her step in a polemical work entitled Von Babylon nach Jerusalem (1851), which elicited a vigorous reply from Heinrich Abeken, and from several others as well.

From November 1852 until February 1853 she retired into the Convent du Bon-Pasteur at Angers/France, which she, however, soon left, taking up her residence at Mainz where she founded the convent Vom Guten Hirten, in which she lived from 1854 until her death, without joining the order, and continued her literary labours."

Taken from the wikipedia article at http://en.wikipedia.org/wiki/Ida,_Countess_von_Hahn-Hahn