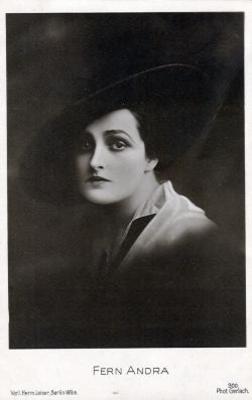 Ferm was born as Vernal Edna Andrews in 1893, the daughter of a circus performer and opera singer. She trained in song and dance and remained in the circus. She traveled the world doing performances. As she was in Berlin, she met Max Reinhardt, who gave her acting lessons. She was one of the most popular and best-known actresses in German silent films of the 1910s. On July 4, 1922, Andra was involved in the Hamburg Berlin mail plane incident. The pilot was killed. Andra was initially misreported as dead but survived. Fern died in South Carolina at the age of 80.