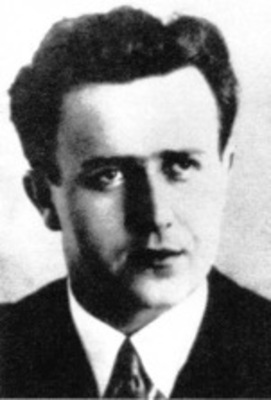 Karl Barthel was a German politician born in Lohmen (Saxony) on March 20, 1907. He began as a toolmaker and became a member of the German Metalworkers’ Association (DMV). He attended elementary school in Copitz until he joined the Young Communist League of Germany (KJVD) in 1923. Four years later, he was KJVD district head in East Saxony and took part in training at the Reich Party School. In December 1929, Barthel became the youngest deputy of the Communist Party faction in the Thuringian state parliament. In two years’ time he was working as a secretary of the district headquarters of KJVD Thuringia. From 1932-1933 he was a member of the Reichstag. He married chemist Leni Streng in November of 1932.

After Hitler established dictatorship, Barthel was an active leader in organizing the anti-fascist resistance in Silesia. He was arrested in Breslau and spent two and a half years imprisoned during 1934 before being placed in the Lichtenburg and Buchenwald concentration camps until the liberation. After Nazi reign ended in 1945, he became mayor of Jena and contributed to building an antifascist democratic city administration. He died in Jena on February 21, 1974.