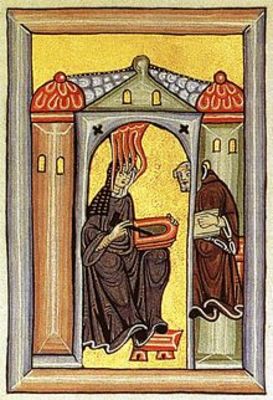 Hildegard von Bingen was a German Benedictine abbess, writer, composer, philosopher, Christian mystic, and polymath. She was born in 1098. Her parents were Mechtild of Merxheim-Nahet and Hildebert of Bermersheim. During her childhood she experienced visions, which cause her parents to offer her to a Benedictine monastery at the Disibodenberg. The date of her oblation is debated, though it is believed that she was enclosed at the same time period as another woman, Jutta, who was enclosed in 1112. Jutta was a close confidant for Bingen, who told Jutta about her visions. The two women established a growing community of women attached to the male monastery. Bingen learned to play the ten-stringed psaltery and psalm notation, which she used in later compositions.

Bingen was elected the magistra of the community by her fellow nuns after Jutta’s death in 1136. She managed to convince the Abbot of Disibodenberg to grant the nuns their own monastery in St. Rupertsberg. She continued to experience visions throughout her life and eventually gained the permission of Pope Eugenius to document them.

Bingen’s works include three great volumes of visionary theology, musical compositions for liturgy, a musical morality play, and a collection of letters to recipients varying from Popes and Emperors to abbots and abbesses. She also recorded many of her sermons preached in 1160-1170, as well as two volumes about medicines and manuscripts and commentaries. She died on September 17, 1179.