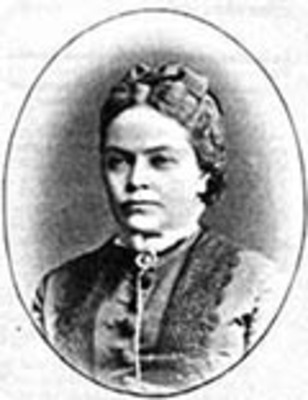 Ebner-Eschenbach was born the daughter of a baron and baroness. Her mother died when Ebner-Eschenbach was young, but she received a good education from two stepmothers. In 1848 Ebner-Eschenbach married her cousin Moritz von Ebner-Eschenbach who was an Austrian captain and subsequently a field-marshal, but the couple had no children. While living in Vienna, Ebner-Eschenbach began focusing on writing with encouragement from Franz Grillparzer and Freiherr von Münch-Bellinghausen, two prominent Austrian writers. Ebner-Eschenbach focused on dramas namely Maria Stuart in Scotland (German: Maria Stuart in Schottland) and several one-act dramas such as Doktor Ritter, Violets(German: Das Veilchen), and The Disconsolate One. She also wrote narratives including Die Prinzessin von Banalien,Das Gemeindekind, Lotti, die Uhrmacherin, Zwei Comtessen, Unsühnbar and Glaubenslos. Ebner-Eschenbach was hailed for her incisive wit and masterly depiction of character. On her 70th birthday, the University of Vienna conferred upon her the degree of doctor of philosophy, honoris causa. She died March 12, 1916 in Vienna.