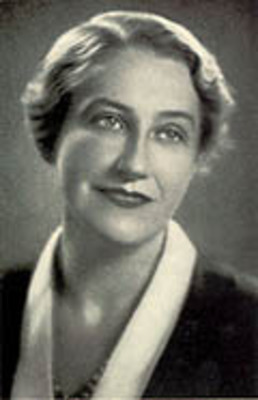 Thea Gabriele von Harbou was a German screenwriter, novelist, film director, and actress born in Tauperlitz, Bavaria on December 27, 1888. She grew up comfortably in a family of minor nobility. She was educated in a convent by private tutors who taught her multiple languages and instructed her in piano and violin. Her first works were a short story and a volume of poems. Despite her father’s disapproval, she sought to become an actress.

Thea met and married Rudolf Klein-Rogge during World War I. By 1917, the couple moved to Berlin where she focused on building her writing career. Soon after she became connected with German film director Joe May, who decided to adapt one of her works for the screen. This inspired her to become a film writer. While partnered with Fritz Lang professionally, the two had an affair; Thea divorced Klein-Rogge and married Lang after his wife died. She developed her screenplays into full-length novels with the purpose of publishing them once the given film was released. Her most famous screenplay was Metropolis in 1927, though it was never written into a novel. Thea divorced Lang on April 20, 1933 due to her loyalty to the Nazi party and his discovery of her affair with a young Indian journalist. When Hitler came to power in that same year, Thea wrote and directed two films, but found the experience lacking. She returned to writing on several films.

Thea was held in a British prison camp from July to October 1945. While in prison, she directed a performance of Faust. After her release, she worked as a Trümmerfrau (rubble woman) for a year. During her later years she suffered from high blood pressure, migraines, and neuralgia, but she continued to write whenever possible. She died in Berlin on July 1, 1954.