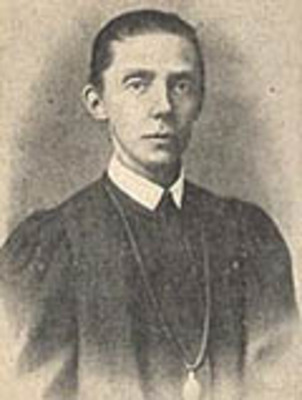 Countess Maria Theresia Ledóchowska was born on April 29, 1863 in Austria as the first of seven children of her Polish parents. Her family was very religious; her brother Wladimir and sister Ursula both became high officials in the Catholic church, the latter was eventually canonized as Maria Theresia was beatified. Originally however, Maria Theresia was lady-in-waiting to the grand Duchess Alice of Tuscany before encountering missionaries and learning of Charles Lavigereie’s emancipation campaign for the African slaves. Lavigerie’s work inspired Maria Theresia to become a nun and missionary to the slaves in Africa, for which efforts she was called the “mother of the Africans”.

In Africa she coined her pseudonym “Alexander Halka”in order that she might write and edit for the mission’s journal publication. The missionary letters she compiled and other articles she wrote eventually became a separate publication, further necessitating the use of her masculine pseudonym. She became so influential that she received the support of Emperor Franz Joseph and founded the mission of St. Peter Claver, which focuses on educating the less fortunate. She worked to translate many religious texts for the natives and worked until her death from tuberculosis in Rome on July 6, 1922.