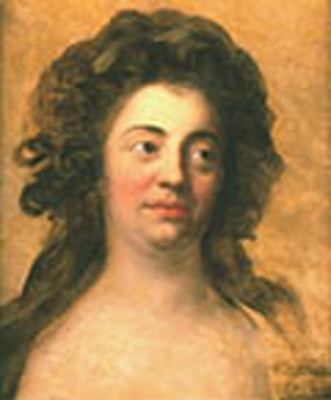 Dorothea von Schlegel was born in 1764 in Berlin. Oldest daughter of the philosopher Moses Mendelssohn, a leading figure in the German Enlightenment (Aufklärung). In 1783 she married the merchant and banker Simon Veit, brother of the physician David Veit. Their son, Philipp Veit, would later become part of a circle of German Christian painters called "the Nazarenes," who influenced the English painters in the Pre-Raphaelite Brotherhood. She met the poet and critic Friedrich von Schlegel in the salon of her friend Henriette Herz in July 1797, after which Dorothea divorced Simon on the 11th of January, 1799. She obtained custody of her younger son, Philipp, and lived with him at the Ziegelstraße, which became a salon frequented by Tieck, Schelling, the Schlegel brothers, and Novalis.

Schlegel's novel Lucinde (1799) was seen as an account of their affair, causing a scandal in German literary circles. In 1801 her novel Florentin was published anonymously by Schlegel. Dorothea and Friedrich lived in Paris from 1802 until 1804, and after her divorce they married as Protestants. In 1807 she translated Corinne by Madame de Staël from French.In 1808, Friedrich and Dorothea converted to Catholicism. (She may have adopted the name "Dorothea" from a 17th-century Dorothea von Schlegel who composed Catholic hymns). They continued to visit the salons of Rahel Levin and Henriette Herz, as well as the constellation which surrounded Madame de Staël. Friedrich died in 1829, after which Dorothea moved to Frankfurt am Main. There, she lived with her son Philipp (also a convert to a medieval style of Catholicism) until her death in 1839.