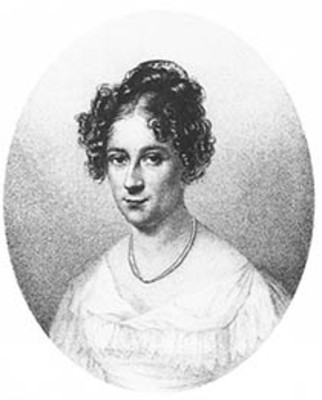 The Jewish author Rahel Varnahgen von Ense was born in Berlin in May of 1771. She grew up with daughters of famous thinkers like Mendelssohn, and became famous for her literary salon. Friederich Schlegel, Alexander and Wilhelm von Humboldt, F.W.J. Schelling and other such men came to her salons regularly to meet and share ideas. Before this, however, she had returned to Berlin after several years in Paris. She then converted to Christianity and married Karl Auguste Varnhagen von Ense in 1814. She maintained an extensive sequence of correspondences with friends and relatives--such as her brother Ludwig Robert, the playwright and poet--throughout her lifetime through thousands of letters, some of which her husband published as essays after her death. She was always intensely loyal to and aware of her Jewish friends and devoted much of her time to helping them integrate better into Christian society by breaking as strongly as possible with what she viewed as their tainted association with Judaism.