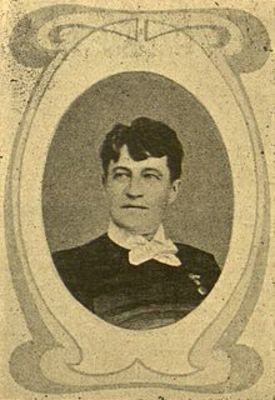 Eupfemia von Adlersfeld Ballestrem was born in Ratibor, Schlesien in 1854 to the Count Alexander Karl Wolfgang con Ballestrem di Castellengo and his wife, Mathilde von Ballestrem. After the death of her father in 1881 she traveled to Italy with her mother and developed an interest in the Arts, particularly Literature. After their trip, her family settled in Breslau, where she met and later married Joseph Fritz, a riding master. They then moved to Fort Militsch, and in 1885 she bore their first and only child, a daughter named Dagmar. During the next 20 years they moved often because of her husbands work. In 1907 as they were living in Vevey, Switzerland, her husband passed away and one year later she moved to Karlsruhe, and then at the end of the first world war she settled in Munich, where she died some years later in April 1941.

She was writing for almost her entire adult life, having published her first work, Die Nichten des Kardinals at age 17, some 10 years before her father's death, and continued until the year she passed away, publishing in her later years at least one novel per year, thought she also wrote poetry and humourous pieces.