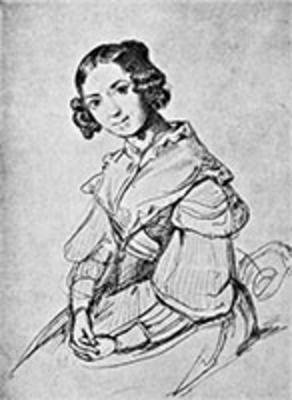 Luise Adelaide Lavinia Schopenhauer, known as Adele Schopenhauer (12 July 1797 – 25 August 1849), was a German author. She was the sister of the philosopher Arthur Schopenhauer and daughter of author Johanna Schopenhauer. Henriette Sommer and Adrian van der Venne were pseudonyms used by her. Adele Schopenhauer was born in Hamburg to Heinrich Floris Schopenhauer, a businessman, and his wife Johanna. She grew up in Weimar under the influence of a circle of artists and scholars who gathered in the literary salon run by her mother. She was highly gifted and engaged in literature and poetry. She not only wrote fairy tales, poems, and novels, but was also a talented papercut artist. Both her papercuts and her literary contributions have been recognized and appreciated, especially in the English-speaking world.