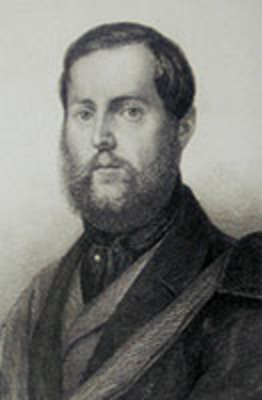 Born into the Westphalian nobility on the estate of Klemenswerth, near Meppen, his mother, Sibilla Katharina née Busch (1791–1831) was a poet who occasionally published, whilst his father was Paulus Modestus Schücking. Levin's mother became friend of the poet Annette von Droste-Hülshoff, who wrote her son a letter of introduction when he left home for the gymnasium in Münster. Shortly after he left home, his mother died, and Droste-Hülshoff did her best to fill this gap in his life. After studying law at Munich, Heidelberg and Göttingen, Schücking wished to enter the government judicial service, but, confronted by serious difficulties, abandoned the legal career, and settling at Münster in 1837, devoted himself to literary work. In 1841 he removed to Schloss Meersburg on the Lake of Constance.

In 1843, Schücking married Luise von Gall. Up to this time, Droste-Hülshoff had been a major inspiration in his life, but she and his wife did not get along. Droste-Hülshoff felt he neglected her and that his head was too turned by the revolutionary "young Germany". And then Schücking published a novel on the Westphalian nobility, which did not depict them favorably, and Droste-Hülshoff's friends, sometimes rightly, sometimes wrongly, traced many of the depictions back to Droste-Hülshoff. This annoyance led to her avoiding Schücking for the rest of her life. Also in 1843, he joined the editorial staff of the Allgemeine Zeitung in Augsburg, and in 1845, he joined that of the Kölnische Zeitung in Cologne as a literary editor and occasional foreign correspondent. In 1852 he left his career in journalism for his estate in Sassenberg near Münster to have more time for writing. He died at Pyrmont on 31 August 1883.