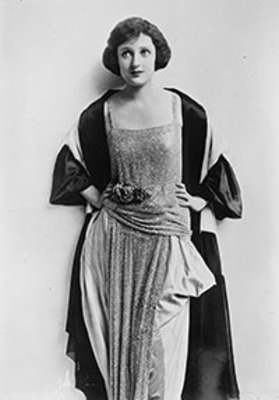 Myers was born in San Francisco, the daughter of an Australian rabbi and Austrian Jewish mother.[1] Her father became well-connected with California's emerging film industry, and introduced her to film pioneer D. W. Griffith, who gave Carmel a small part in Intolerance (1916). Myers also got her brother Zion Myers into Hollywood as a writer/director.

From this beginning, Myers left for New York City, where she acted mainly on stage for the next two years. She was signed by Universal, where she emerged as a popular actress in vamp roles. Her most popular film from this period—which does not feature her in a vamp role—is probably the romantic comedy All Night, opposite Rudolph Valentino, who was then a little-known actor. She also worked with him in A Society Sensation. By 1924 she was working for Metro-Goldwyn-Mayer, making such films as Broadway After Dark, which also starred Adolphe Menjou, Norma Shearer, and Anna Q. Nilsson.

Myers had a fairly successful sound career, mostly in supporting roles, perhaps due to her image as a vamp rather than as a sympathetic heroine. Subsequently, she began giving more attention to her private life following the birth of her son in May 1932. Amongst her popular sound films are Svengali (1931) and The Mad Genius (1931), both with John Barrymore and Marian Marsh, and a small role in 1944's The Conspirators, which featured Paul Henreid, Peter Lorre, and Sydney Greenstreet.

Myers surfaced in the entertainment world again briefly in 1951, with a short-lived DuMont Television Network show called The Carmel Myers Show, which followed the interview format. After its cancellation, Myers focused on a career in real estate and her own perfume distribution company. In 1976, Myers was one of the very few silent stars who were cast in Won Ton Ton, the Dog Who Saved Hollywood, a comedy featuring cameos by dozens of Hollywood stars of the past.

Myers died in 1980 at the age of 81 and was buried near her parents at Home of Peace Cemetery in East Los Angeles.