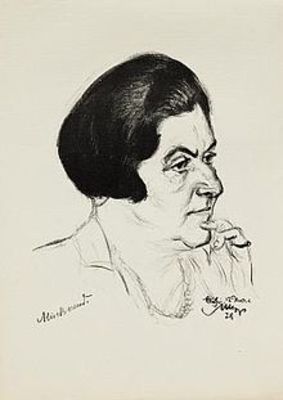 Alice Berend was born in Berlin on June 30, 1875 and was the daughter of a factory owner and a banker. Her younger sister was a painter named Charlotte Berend-Corinth. Berend attended high school in 1898, then wrote for various newspapers. She married John Jönsson, a Swedish writer, in 1904. They lived in Konstanz from 1920-1924. During this time, she became acquainted with many artists such as Kasia of Szadurska, Willi Münch-Khe, Karl Einhart , Waldemar Flaig , Fritz Mauthner and Harriet Straub and Wilhelm von Scholz. She and Jönsson eventually divorced and she married a painter named Hans Breinlinger. Berend and her second husband moved to Berlin. In 1933 her works were placed on a list of harmful and undesirable writings by the Nazis. She and Breinlinger divorced in the same year.

In 1935, she emigrated with her daughter, Carlotta Florence. She died three years later in Florence on April 2, 1938 after a long illness.