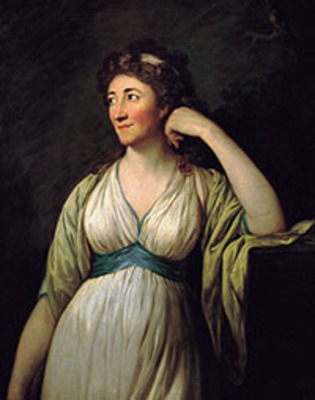 Elisa von der Recke, born von Medem, descended from a well-established line of landowners with sizeable holdings in Kurland (present-day Lithuania and Latvia). At the death of her mother, the young Elisa was entrusted to her stern and zealously religious grandmother, whose prime concern was the cultivation of the young girl's beauty and manners. After a childhood of misguided discipline from her grandmother and abuse at the hands of her cousin and aunt, Elisa was rescued in her eleventh year by her stepmother Agnes (von der Recke) von Medem, who returned her to her father's house and took charge of her education and upbringing. At seventeen, the girl's parents manipulated her into a marriage with Georg Peter Magnus von der Recke, an affluent baron whose personality and and interests clashed in all aspects with those of his young wife. The marriage proved quite intolerable from the outset, but it was here, living in isolation from friends and family in her husband's castle, that von der Recke first discovered the writings of Wieland, Gellert and Young. Greatly influenced by Rococo and sentimental literature (Empfindsamkeit), she subsequently developed her own sentimental-mystical world view.

After five years of separation, von der Recke and her husband divorced in 1781. A series of premature deaths, including those of her brother, her child, and an honored friend, the poet Hartmann, combined with her natural tendency to religious enthusiasm (Schwärmerei), left von der Recke vulnerable to the wiles of the spiritualist Alessandro Cagliostro, whose imposture and fraud she would later publicly decry. During this period of turmoil and transition, von der Recke was slowly drawn to Pietism. Increasingly, she surrounded herself with theologians, philosophers and authors such as Jean Paul, Johann Kaspar Lavater, Ludwig Feuerbach and Johann Heinrich Jung-Stilling; in addition, she maintained personal ties with Immanuel Kant, Friedrich Gottlieb Klopstock, and Moses Mendelssohn. In 1795, she visited Catherine the Great on behalf of her native Kurland, which had fallen under Russian control. From 1803, the author Christoph August Tiedge became von der Recke's closest associate and travel companion. Much of her later life, until her death in 1833, was spent in Dresden and its surrounding mineral springs and baths. Elisa von der Recke's literary accomplishments include poetry, journals, an autobiographical essay which appeared in Der Deutsche Merkur, biographical sketches of Lavater and Joachim Neander, and her exposé of Cagliostro.