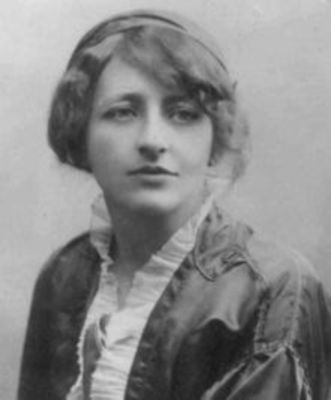 Fanny (or Franziska, as she was also called later) Reventlow was born in the family seat at Husum in the north of Germany, the fifth of six children of the Prussian aristocrat Ludwig, Count zu Reventlow (1825–1894) and his wife Emilie (1834–1905). The family were on friendly terms with the North German writer Theodor Storm. Her eldest brother Theodor died as a fifteen-year-old, her brother Ernst was an ultra-nationalist writer and eventually became a Nazi.

While young she was in constant conflict with her mother. She was thrown out of boarding school for misbehavior and lack of respect for the authorities. After being sent to stay with a family friend in 1893, she fled to Hamburg. Here she met Walter Lübke, who financed her art studies in Munich, and whom she married in 1894.

The marriage broke up when she set off again in 1895 to Munich, to continue her studies. They were divorced in 1897. In September of that year her son Rolf was born; she never divulged the name of the father (although it is very likely to have been the Polish-born painter & engraver Adolf Eduard Herstein).

In Munich she supported herself by translation work for the Albert Langen Publishing House and by writing short articles for magazines and newspapers such as Simplicissimus and the Frankfurter Zeitung. After taking some acting lessons in 1898 she had a short engagement at the Theater am Gärtnerplatz. Otherwise she took casual jobs as a secretary, assistant cook, insurance agent and so on to keep going. As usual in Bohemian circles she also received financial help from male friends and casual acquaintances.

She was a friend of Ludwig Klages and thus became part of the Munich Cosmic Circle based around the mystic Alfred Schuler, which also included Karl Wolfskehl. It broke up in acrimonious circumstances in 1904. She wrote about her experiences with the Circle in her Roman à clef Herrn Dames Aufzeichnungen (1913). She also got to know Theodor Lessing, Erich Mühsam, Oskar Panizza, Rainer Maria Rilke, Marianne von Werefkin, Alexej von Jawlensky, Franz Wedekind and many others of the "Munich Moderns". With her son she travelled to Samos (1900), Italy (1904, 1907) and Corfu (1906/1907).

She left Munich for Ascona in Switzerland in 1910 (Monte Verità), where she wrote her "Schwabing" novels. In 1911 married Baron Alexander von Rechenberg-Linten, a marriage of convenience, which enabled him to inherit 20,000 Marks. However, he lost this in a bank collapse in 1914.

In 1916 she moved to Muralto on Lago Maggiore. She died in 1918 in a clinic in Locarno following a bicycle accident and was buried in the cemetery of the Santa Maria in Selva church in Locarno. Emil Ludwig spoke at her funeral.