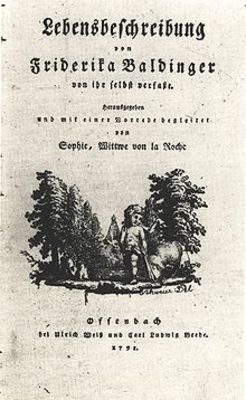 The only known work of this author is an autobiographical sketch, commissioned by and dedicated to her husband some three years before her death. Intended not as a comprehensive autobiography, but as a brief summary of the development of her intellect, Baldinger's Lebensbeschreibung tacitly documents the frustrations of many 18th-century women for whom traditional attitudes towards women's education were too restrictive and narrow. Behind the surface conciliatory tone lurk half-spoken questions concerning women's upbringing and marriage that challenge the very foundation of "enlightened" German society.

Born in Großgottern (Thüringen) in 1739, Friderika Dorothea Gutbier grew up in a strict religious environment under the auspices of her widowed mother. Among the stabilizing and educative influences in her younger years were her older brother and his friend, a preacher named Kranichfeld. Recognizing the young girl's uncommon keenness, these men actively participated in satisfying Friderika's insatiable appetite for books, providing her with scholarly texts and involving her in conversations that others, including her mother, deemed a waste of time and unsuitable for "respectable" young women. Her striking intellect was the trait which most won the attention of her future husband, Ernst Gottfried Baldinger. By her own account, Baldinger took her familial obligations very seriously. But in spite of six children and household cares, she nevertheless found time for intellectual pursuits. Her association with respected author and physicist Georg Lichtenberg, and the poet and mathematician Abraham Gotthelf Kästner are particularly worthy of note. Also of great importance was Friderika's correspondence with Sophie von la Roche, a connection that undoubtedly nurtured her literary and intellectual interests.