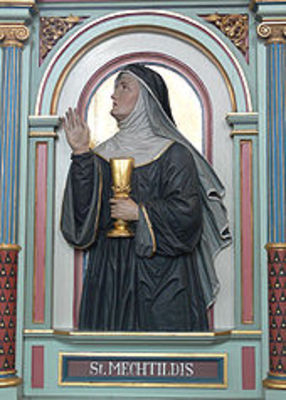 Mechthild von Magdeburg was the first Christian medieval mystic to write in German. Her book The Flowing Light of Divinity described her visions of God.

Magdeburg was born around 1207 to a Saxon family. Her first vision of the Holy Spirit occurred at age 12. She renounced all worldliness in 1230 and became a Beguine at Magdeburg. It was here that she was encouraged to write her book at the insistence of her confessor, Henry of Halle. Her writings were critical of the existing church’s dignitaries and theological insights, which made her rather unpopular. She joined the Cistercian nunnery at Helfta around 1272. While there she finished writing her divine revelations despite having gone blind during the years before. Magdeburg is believed to have died after 1282.