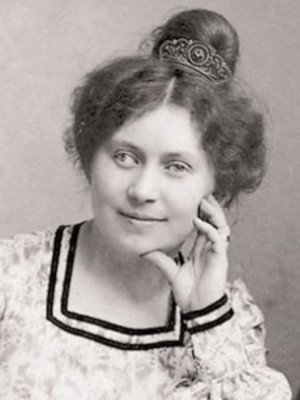 Karin had a poor early life where she was made fun of at school because she was small, chubby, and suffered from a lazy eye. She was a private teacher in her youth. She moved to Copenhagen in 1892 to become trained as a piano teacher. where she became acquainted with the writer Sophus Michaelis, whom she married in 1895. They earned their living predominantly through theater reviews, and divorced in 1911.

The following year, Michaelis married the Norwegian-American diplomat Charles Emil Stangeland in New Rochelle, New York. They were separated in 1917 and divorced in 1930.

During World War I, Michaelis was active in humanitarian work in Austria. Early on, Karin Michaelis warned of the danger arising from Mussolini and Hilter. In 1932 she took part in an anti-war congress in Amsterdam. From 1933 on she took in German emigrants on her property In Thuro. After the rise of fascism, her books were banned in Germany and Italy. In 1940, with the invasion of Denmark, she herself emigrated to America; in 1946, after the end of World War II, she returned to Denmark where she died.