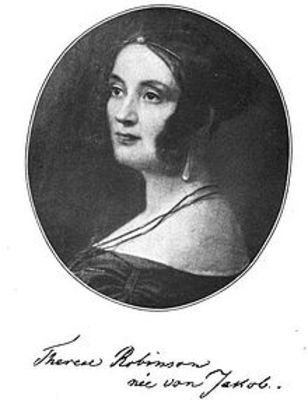 Therese Albertine Luise von Jakob Robinson was a German-American author, linguist, and translator. She was born in Halle, Germany on January 26, 1797. Her father was Ludwig Heinrich von Jakob, a political writer and professor of philosophy. She accompanied him to the University of Charkow, Russia. Though Therese was not given a formal education, she studied Slavic languages and history via the university library. She wrote poetry, short stories, and a series of literary criticisms which she hesitated to publish under her own name. Other work involved translation and composition of Serbian folk songs.

Therese married American theologian Edward Robinson in August of 1828. They lived in Europe for two years, then settled in Andover, Massachusetts where he became a professor at the Andover Seminary. Therese moved with him to Boston in 1833 and resumed her literary activity by translating texts into German. Therese returned to Germany after her husband’s death in 1863 and died in Hamburg on April 13, 1870.