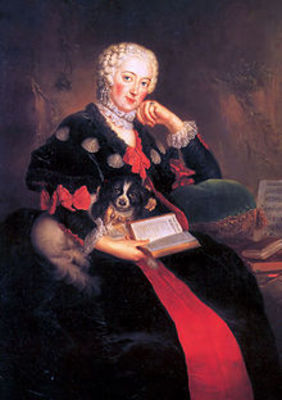 Princess Wilhelmine of Prussia (Friederike Sophie Wilhelmine) was born in Berlin on July 3, 1709. During her childhood she suffered severe trauma and abuse by her governess until her mother was made aware of the situation; the governess was dismissed. As the oldest daughter of the family, Wilhelmine was subject to many discussions between her parents, Frederick William I of Prussia and Sophia Dorothea of Hanover, about political marriages. Eventually, she married Frederick, Margrave of Brandenburg-Bayreuth in 1731. He was meant to marry Wilhelmine’s younger sister, Sophie, but was surprised to find that his bride had changed. Wilhelmine’s father ensured that the marriage continued, despite her initial apprehensions.

In 1735, Wilhelmine and her husband set about making Bayreuth into a miniature version of Versailles. They rebuilt and created new buildings in what became known as the Bayreuth Rococo architecture style. They also founded the University of Erlangen. Though their efforts made Bayreuth one of the intellectual centers of the Holy Roman Empire, they nearly bankrupted the court.

Wilhelmine was a supporter of music and a composer herself. She was a lutenist and composed an opera and some chamber music. She wrote and published her memoirs Memoires de ma vie in French between 1748 and her death on October 14, 1758.