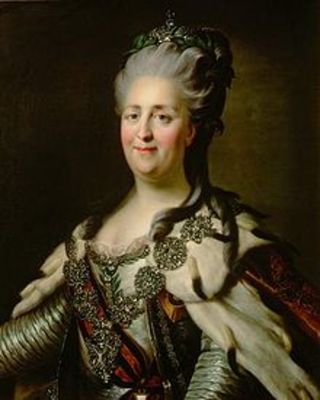 Katharina die Große was born 2 May, 1729 as Princess Sophie Auguste Friederike von Anhalt-Zerbst-Dornburg in Stettin, Prussia. Katharina received her early education from a French governess and private tutors. At age 10 she met her future husband, the prospective tsar of Russia, Peter of Holstein-Gottorp. Due to the political interest and involvement of Peter’s aunt, (Empress Elizabeth of Russia), and others, Peter and Katharina were married on 21 August, 1745, following Katharina’s conversion from German Lutheranism to Eastern Orthodoxy.

After the death of Empress Elizabeth in 1762, Katharina’s husband, Peter III, became tsar of Russia. Shortly afterward, following a coup d’état and the assassination of her husband, Katharina took Peter’s place on the throne and became Empress of Russia on 9 July, 1762. The period of Katharina’s reign was one of great growth and expansion for Russia. An ardent admirer of Voltaire and the Enlightenment ideas, Katharina created public schools, orphanages and hospitals as she constantly sought to improve and bend the minds of the people to western philosophy. She founded the Smolny Institute for girls and wrote educational manuals for young children, as well as comedies, fiction and memoirs.