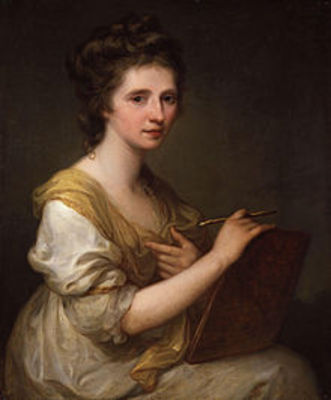 Maria Anna Angelika Kauffmann (Angelica Kauffmann) was an Austrian Neoclassical painter born in Graubünden, Switzerland on October 30, 1741. She was taught by her father, Joseph Johann Kauffmann, who was a skilled painter. By 12 years old, Maria was known for her own works. Between 1754 and 1762 she took several lengthy visits to Italy. She became a member of the Accademia di Belle Arti di Firenze in 1762. Eventually she moved to London and was well-received for her works.

In 1767 Maria had a brief marriage to an imposter named Count Frederick de Horn. She continued to travel throughout Europe and complete various works and portrait commissions. She specialized in history painting, which was considered the most elite and lucrative category in academic painting. During 1768, she became one of two female founding members of the Royal Academy in London. In 1781 she married Antonio Zucchi, a fellow artist. After his death in 1795 she continued to contribute to the Royal Academy in London and held her last exhibit in 1797. She died in Rome on November 5, 1807.