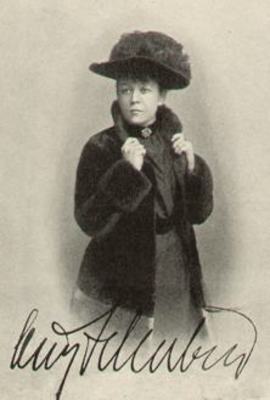 Aloisia (Lula) Kirschner, who wrote numerous novels and stories under the pseudonym Ossip Schubin, was born on June 17, 1854, in Prague. Her early years were spent in cloistered seclusion on her parents' estate in Lochkov. However, her older sister possessed exceptional artistic talent, and at length Kirschner's mother took both daughters on extended study hours through Munich, Paris, Brussels, Rome and other cultural centers. These joureys afforded the young ALoisia the opportunity to mingle in literary and cultural circles, and she became acquainted with such well-known authors as Ivan Turgenev, George Sand, and Alfred Meissner, all of whom encouraged her in her writing.

From her sixteenth year, Kirschner devoted herself entirely to her literary production. Her first novella, "Verkannt und verfehlt," appeared in the Prague periodical Bohemia, she later published regularly in important literary journals of the day such as Schorers Familienblatt, Über Land und Meer, and Deutsche Rundschau. Drawing her themes from the culutral and social life of her times, she was recognised mainly as a storyteller. Kirschner died in Bohemia on February 10, 1934.