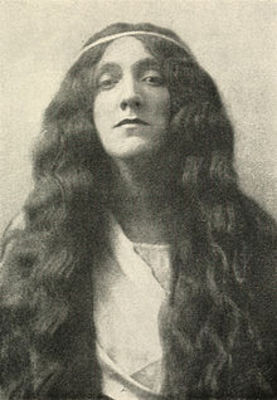 Anna Bellschau von Mildenburg, to give her full maiden name, was born in Vienna, the Austrian capital. She studied voice with Rosa Papier and Johannes Ress at the Conservatory of Gesellschaft der Musikfreunde in Vienna, and then privately with Cosima Wagner and Mahler. She had an affair with the latter which lasted until 1897.

Von Mildenburg made her operatic debut in 1895 at Hamburg, singing the role of Brünnhilde in The Ring Cycle under Mahler's baton. Then, in 1897, she performed the role of Kundry in Parsifal at the Bayreuth Festival, and also took on the mezzo-soprano part of Ortrud in Tannhäuser. Cosima Wagner, the composer's widow, became her mentor at Bayreuth, and she proceeded to perform all the main Wagnerian soprano parts at the festival prior to the outbreak of World War I in 1914.

Mahler first brought her to the Vienna State Opera in 1898, where she was put on a contract and soon experienced enormous success. Her stature at the opera house equaled that of Mahler, who was then the establishment's director of music. She would perform at the Vienna State Opera until 1917, and then again in 1919-1920. Among her most celebrated performances during this period was an assumption of Isolde's role in a famous production of Tristan und Isolde mounted under Mahler's leadership.

Away from Vienna, von Mildenburg sang to acclaim in London at The Royal Opera House, Covent Garden, performing Isolde and Elizabeth in Tannhäuser there in 1906, as well as Klytemnestra in the first London production of Richard Strauss' Elektra. She also appeared in Beethoven'sFidelio, Bellini's Norma, Mozart's Don Giovanni and Weber's Oberon during the course of her career.

From 1922 to 1927, von Mildenburg was a guest artist at the Salzburg Festival, appearing in Hugo von Hofmannsthal's stage work Das Salzburger grosse Welttheater, among other productions. After retiring from opera, she gave singing lessons in Munich, Germany. Among those she instructed in Munich was the renowned Wagnerian tenor, Lauritz Melchior, who consulted her in 1922. After 1929, she taught voice at the International Mozarteum Summer Academy in Salzburg, Austria, but she returned briefly to the stage in 1930 to sing one last Klytemnestra at Augsburg.

She eventually retired from teaching because of the exigencies of the Second World War and died in 1947. Together with her husband, the Austrian author, playwright and critic Hermann Bahr, she is buried in a place of honor in the Salzburg Community Cemetery.