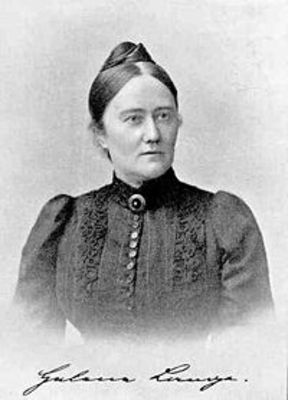 Helene Lange was a pedagogue and a feminist born in Oldenburg on April 9, 1848. Her mother died from tuberculosis in 1855 and her father died in 1864 from a stroke. In an effort to pursue training to become a teacher, she accepted placement at a boarding school in Alsace where she gave lessons on German literature. Lange also self-studied philosophy, history of literature and religion, historical science, and ancient languages. In 1867 she became a governess in Osnabruck.

Lange passed her teaching exam in 1871 and subsequently worked as a private tutor before becoming teacher and director of a seminar class at Crainschen Girls High School. She established the General German women Teachers Association and later established a magazine entitled die Frau which became increasingly important during the German women’s civil rights movement. Between 1893 and 1898 she served on the boards of the Federation of German Women’s Associations and the General German Women’s Association. She became a leader in girls’ school reform in 1908 while serving as advisor to the Prussian Cultural Administration.

Lange was elected for the German Democratic Party to the Hamburg parliament in 1919. In 1920 she moved back to Berlin and remained active as a publicist. She received an honorary doctorate of political science from the University of Tubingen. In 1928 she was given the Grand Prussian State Medal for “Services to the State”. Lange died on May 13, 1930.