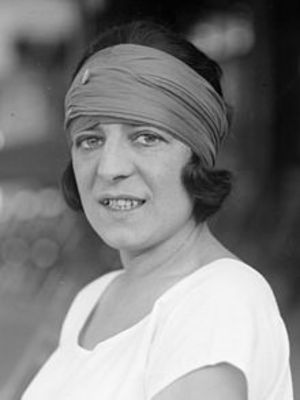 Suzanne Lenglen was a French tennis player born in Paris on May 24, 1899. Because of her ill health during her childhood years, her father decided to have her compete in tennis to gain physical strength. While it did improve her health, she found enjoyment in the sport and received greater training. Lenglen played in the final of the 1914 French Championships at 14 and lost, but celebrated a later victory at the World Hard Court Championships. This win set a record for her as the youngest winner of a major tennis championship.

In the 1920 Summer Olympics Lenglen dominated the women’s singles and won several Wimbledon championships from 1919 to 1925. She won the French Championships Singles title six times, the Doubles five times, and the World Hard Court Championships three times. Lenglen starred in an instructional film Tennis and How to Play It in 1922. She attempted to debut in America, but contracted whooping cough on the journey to New York and was unable to play at her best. The American press was not kind in their reviews of her performance and she returned home devastated. Fortunately after her recovery, she redeemed herself at Wimbledon. She went on to become a professional tennis player.

In June 1938 Lenglen was diagnosed with leukemia and her health deteriorated rapidly. She died of anemia on July 4, 1938.