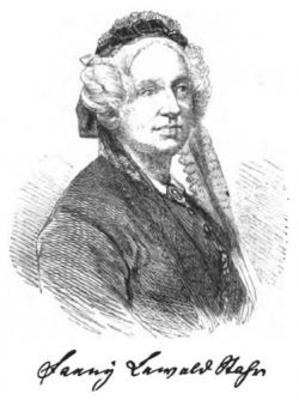 Fanny Lewald was born on March 21 in 1811 the oldest of 9 children in Königsberg. While Lewald was born Jewish she converted to Christianity at 17. Lewald traveled extensively in her youth to Italy, France, and various parts of Germany which helped in her powers of composition. In 1841 Lewald published her first novel Der Stellvertreter in her cousin August Lewald’s periodical Europa. In 1845 Lewald settled in Berlin and in 1854 she married author Adolf Stahr.

After the death of her husband in 1874 Lewald moved to Dresden where she spent her time writing until her death on 5 August in 1889. Her writings have won her fame for their satire and champion of women’s rights particulalty for her attacks on the sentimentalism of the Gräfin von Hahn-Hahn. Her most well-known works concerning the emancipation of women were Osterbriefe für die Frauen (1863) and Für und wider die Frauen.