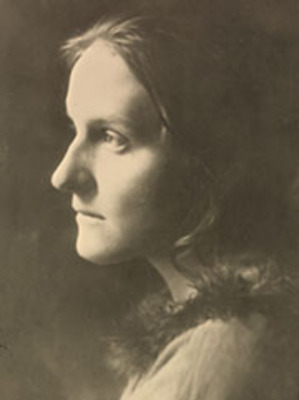 Inge von Holtzendorff was born in Italy. Her father died when she was 9 months old of lung disease. After her father’s death, her mother, Hermione, traveled the world and left her children home with relatives and servants. Inge von Holtzendorff was eventually adopted by father’s sister, Margaret Holtzendorff in 1906. In 1911 both von Holtzendorff and her sister moved in with Hermione again in Berlin. Tragically, Hermione died suddenly on December 12th, 1918 of a stroke. In 1920 von Holtzendorff met her future husband and four of her plays were published. In 1923 she married the painter Conrad South Pole. Over the next few years Inge and her husband moved frequently. They changed apartments in Dresden, then moved to a farm in Waltenhofen, Berlin, Paris, Italy, and Greece. Between 1934-1939 the family moved around in Greece, including Athens, Sparta, Mystras, Corinth and Mycenae, and Crete. Inge von Holtzendorff wrote two plays before her marriage and several in the later years, as it took a while for her husband to get used to them. Some of von Holtzendorff´s works were also translated into Greek while she still lived. October 1974 von Holtzendorff died in a hospital in Würzburg. Her husband died shortly thereafter from loneliness and depression.