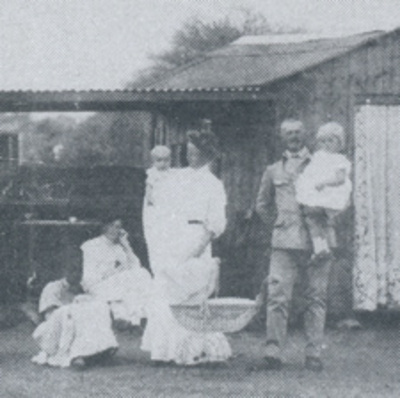 Lydia Höpker travelled to Kayas, South-West Africa to run a household for a German farmer while he travelled to Germany. Overseeing the household included taking care of a the farmer’s assistant and 19 year-old son. Höpker went on safari, learned to shoot small game, navigated the West Africa landscape, and got malaria. She managed the farm at the beginning of World War I. Höpker wrote an autobiography, Um Schole und Leben detailing the hardship of life in Africa.

Her work reflects nationalism, independence as a woman, and pride in hard work. Höpker oversaw workers and wrote that “the natives were ever harder to control. Only my energy and the threat of my beatings [which threat she carried out] were able to keep them in check”. Höpker did not get along with everyone and in the end she started her own farm. She eventually married her friend, Rolf Witte, and became more domestic.