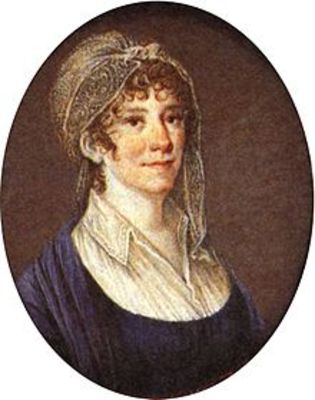 "Therese Huber was born Therese Heyne in Göttingen as daughter of the influential classical philologist Christian Gottlob Heyne. She married traveller and ethnologist Georg Forster in 1785. They lived in Wilno 1785–1787 and in Göttingen and Mainz 1788–1792 and had three children, but an unhappy marriage. After Forster had left Mainz for Paris as representative of the Mainz Republic, she and her lover Ludwig Ferdinand Huber, who had been living with the Forsters in Mainz, moved to Neuchâtel, living under difficult conditions there. She and Forster met for the last time in 1793, when he agreed to a divorce. However, Forster died soon after, and she married her lover. After his 1804 death, she moved in with her daughter inUlm. Huber died in 1829 in Augsburg. The most notable of her ten children, six of which survived, was social reformer Victor Aimé Huber."

Taken from the Wikipedia article at http://en.wikipedia.org/wiki/Therese_Huber