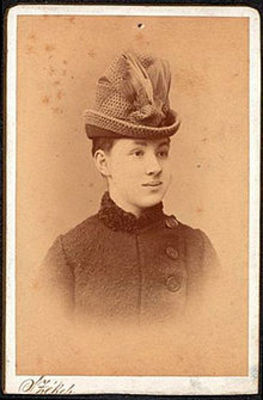 Enrica was born in Vienna in 1871 to a widow who's husband was a captain in the Austro-Hungarian army. He died four months before Enrica was born.

Handel-Mazzetti grew up in Vienna, attended the Institut der Englischen Fräulein in St. Pölten in 1886-1887, then returned to Vienna to care for her mother, who died in 1901.

After living with an uncle in Steyr from 1905 to 1911, she spent the rest of her life in Linz. She was a popular writer until after World War I, when she became a venerated symbol of a past era.

She wrote many storie, two of which were the first of a series of successful historical novels based on actual episodes during the Counter-Reformation in Austria. Handel-Mazzetti did extensive research for the novels; the authentic tone of her dialogue was considered one of the best features of her fiction. Her novels and stories appealed to an audience that enjoyed her folkloristic and thoroughly conservative depictions of society.

It was Jesse und Maria: Ein Roman aus dem Donaulande, however, that propelled her from mere success to prominence, for it became the battleground of the controversy between the liberals around Muth and the conservative Anti-Modernists such as Richard von Kralik and the Swiss theologian Caspar Decurtins.

During World War I Handel-Mazzetti visited wounded soldiers in the Linz hospital and published an enormous body of ephemeral patriotic stories, poems, and reflections. Until her death a decade after World War II Handel-Mazzetti played the role of the tolerant conservative writer.