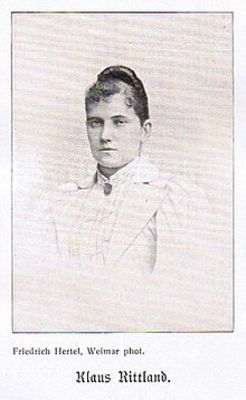 Elisabeth Heinroth,(nee Rindfleisch) was born March 18, 1861 (or 1864, sources are highly debated) in Dessau, Germany. In Cairo, Egypt she married a businessman named Bosch, with whom she had two sons. The couple divorced after just seven and she returned to Germany with the children where she eventually remarried. Her second husband, Wilhelm Heinroth, was a district court president. She wrote rather prolifically; she completed 17 novels before she died in Berlin on December 5th 1920. All of her works were published under the pseudonym Klaus Rittland. Her earlier writings were influenced by her travels abroad. After her second marriage and return to Germany she became more of a socialite in Berlin, as she continued to write her books.