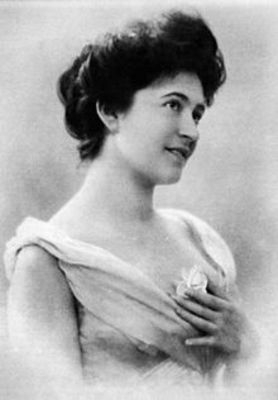 Selma Kurz was an Austrian opera soprano born in Biala, Galicia on October 15, 1874 to a poor Jewish family. She was one of eleven children. She grew up in Bielitz and was taken to a convent of nuns with the intent that Selma become a seamstress. Upon discovery of her voice, the nuns had her sing in the local synagogue. Eventually the locals raised enough funds for her to travel to Vienna and audition for a prominent voice teacher by the name of Professor Gänsbacher. He did not receive her as a student, but recommended her to Count Nicholas (Miklós) Esterházy de Galántha, who agreed to pay for her lessons with another voice teacher, Johannes Ress.

Selma first sang publicly at a concert of Ress’ pupils on March 22, 1895. Her performance resulted in many offers from opera houses. She debuted in the title-role of Ambroise Thomas’s opera Mignon in Hamburg on May 12, 1895 and stayed for the next several seasons in various roles. She was noticed by Gustav Mahler, music director of the Vienna Imperial and Royal Court Opera, and signed a contract with him on September 3, 1899. The two had a short affair in 1900, but as the Court Opera did not permit members to marry among themselves, she chose her career over their relationship. Her popularity in Vienna continued throughout her life. Outside of Vienna, Selma appeared at many other opera houses across Europe. She once had an engagement in the United States at a concert in the New York Hippodrome, but became ill and cancelled the tour.

Selma married Professor Joseph Halban, a gynecologist and professor at Vienna University. They had two children: Désirée, who became a concert soprano, and Georg. Selma developed cancer in 1929 and died in Vienna on May 10, 1933.