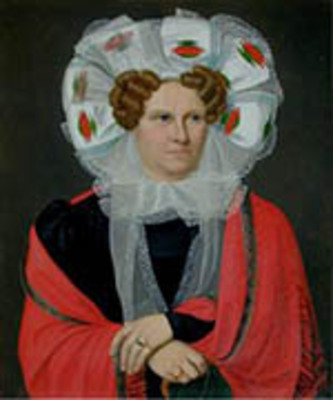 The daughter of a well-known evangelical Pastor, Friederike Brun was afforded all the advantages of an upbringing in an 18th-century German Pfarrhaus: literature, music, and a loving family environment were characteristic of her childhood experience. Her family, stationed in Copenhagen, where her father led the German-speaking St. Petri congregation, enjoyed frequent visits from such literary figures as Friedrich Gottlieb Klopstock, Johann Andreas Cramer, and the Brothers Stolberg. Encouraged by these prominent authors, and later through her correspondence with Johann Gottfried Herder and Wilhelm Grimm, the young author grew confident in her creative ability and openly read her poetry at social gatherings. At age eighteen, Friederike married Constantin Brun, Danish Imperial Consul to St. Petersburg. The increased mobility promised by a marriage to such a high-ranking official was hindered by pregnancy and a severe illness. Brun would eventually give birth to five children, four of which survived infancy. But even the loss of a child could not prepare her for the greatest challenge of her adult life: complete deafness in both ears. With the passing of her father in 1793, Brun suffered a physical and emotional breakdown, the effects of which remained with her until her death, nearly thirty-two years later. As was the custom, Brun's doctors periodically advised her to seek treatment in one of the many spas in Switzerland and Italy. Adopting a popular genre of the day, the Reisebericht, Brun recorded and published her observations during these travels. The positive recognition she received for her creative works helped to legitimize the attempts of other women to find their voice as authors.