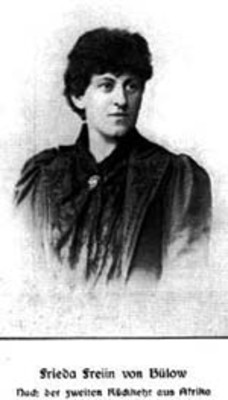 Friede von Bülow was a German author, a traveller in the African colonies and a founder in the beginning of German colonial novels.

Her heritage is rich in noble Bülow blood, and she began her life in Smyrna, Turkey, where her father worked actively in the Prussian consulate. She moved to Germany still in her youth years after the death of her father, and was raised by her mother, Grandmother and four siblings in Neudietendorf, Thüringen.

Her career took a jumpstart as a nurse in the German-African colonies, as a member of the "Frauenverein für Krankenpflege in den Kolonien". This is where she met Dr. Carl Peters, with whom she worked for many years until Maleria broke out in her work area, and had to return to Germany. Thus began her career as a writer.

Her final two years of life were spent with her sister Sophie in Schloss Dornburg, and in 1909 she died of cancer.